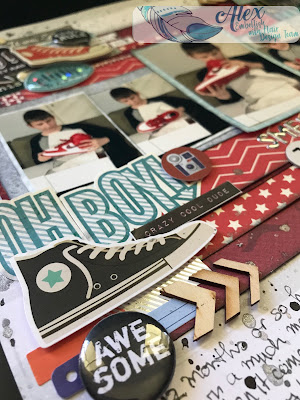 Alex here, and as usual my layout comes with a bit of a back story!

Paper Issues (an online scrapbook retailer) has a Facebook Group with lots and lots of challenges each month.  One of the challenges is a weekly scraplift challenge when a layout by one of their Design Team is selected and the mission is to scraplift it!

The one I chose to scraplift was THIS ONE by MandaJane Ulmer.  It was an August challenge and I thought with the time difference between Australia and the USA I might just scrape in. 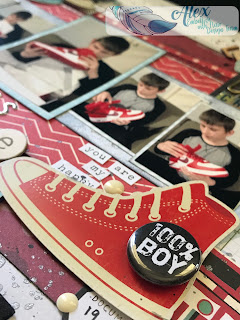 At the same time, my good friend Sara Scraps' Facebook Group Rediscover Your Stash has a monthly product focus and this month it's not a physical product, it's SKETCHES!  I decided to extend this a little bit to include scraplifting.  I'm really hoping to get a lot of great stuff done during September, so by doing that I can mix things up a bit and still bash the product focus!

As soon as I saw the sketch I thought of these photos.  The main photo made me laugh - I mean who sniffs a shoe right out of the box? 🤷🤣  It also gave me a chance to use up as many of those Converse All Star embellishments that so many collections seem to include.  It's an iconic shape and style which makes it easy, so even though his shoes are Nikes, the All Stars will have to do!

A boy layout is also another great way to use up some of my rather large collection of boy Flair and Words 4 was perfect! 👍👍👍 The black co-ordinates with everything else, the words are a perfect match, and the round, shininess helps them stand out at the same time.  I deliberately steered clear of round black elements mostly for this reason.

I wanted to use both red and a burgundy sort of shade (which is tricky to find!) since those were the colours in the shoes.  Grey and black were the most likely candidates for neutrals and I mixed whites and creams so the more shades the better in that regard.

This was another example of a layout which told ME what it wanted.  I wanted to throw in a touch of aqua and maybe lime green and woodgrain, but I ended up pulling all those papers back up again and getting rid of them.  Instead I was told I was allowed to have light blue. 🤷🤷🤷 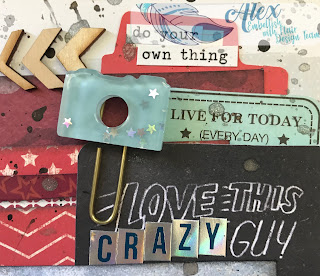 MandaJane's  layout has a lot of embellishment, but only a few papers.  I wanted to add plenty of layers of the various reds rather than just a single one.  It's much more my style and they would look odd if I just put one of each - as though I tried to match them but failed miserably!

I finally finished painstakingly putting together the embellishment clusters in more or less the same spots, but I didn't add the tabs like in the middle of the original layout.

There wasn't a whole lot of space left for ink droplets, but I wanted to bring out the silver in some of the alphas and embellishments.  I picked silver and some greys-with-shimmer mists and went a bit berserk if I'm honest! 😳

Here are a few close up of them: 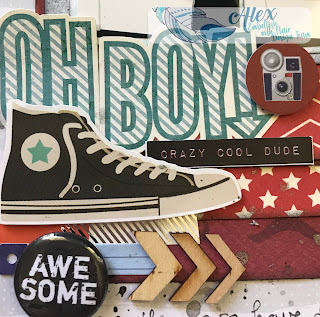 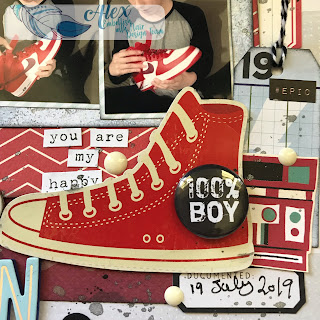 The "love this" sticker is silver but photographed gold for some reason! 😖 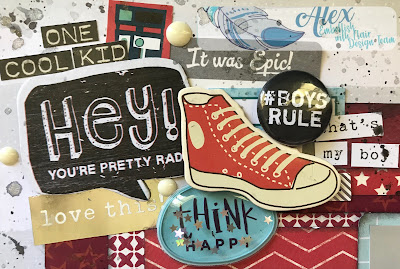 The main photo was part of the inspiration for my  title along with the fact that this guy is 15 and appreciates more and more of his mothers favourite bands from the '90s!   I do love titles with hidden meanings and my boys are pun crazy so they happen a lot! 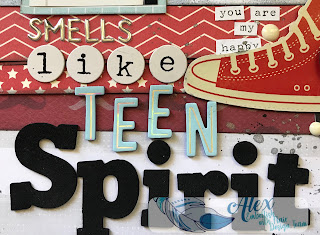 The original layout didn't have any journaling and I needed some, so I kept the bottom left corner free and hoped it would fit.  I tried to write small, used ampersands where possible and it fit! Phew! 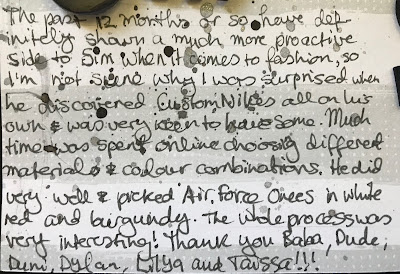 And lastly, here's the whole thing: 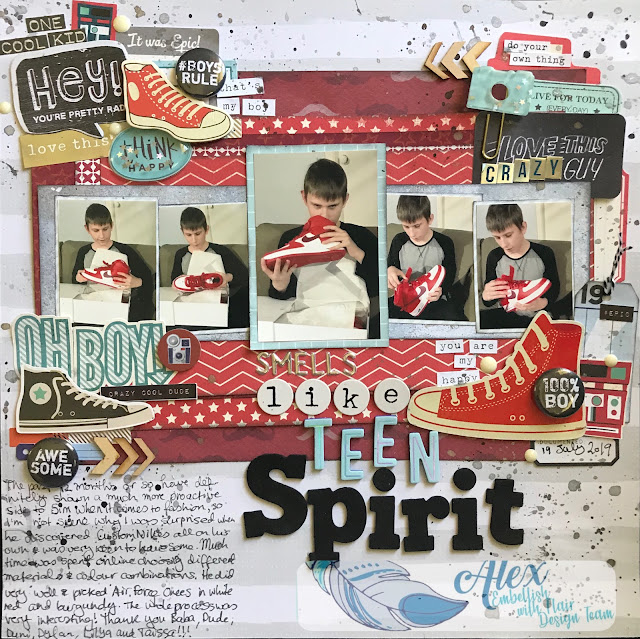 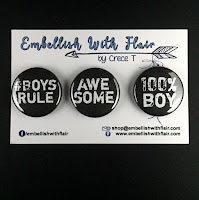 Thanks so much for stopping by!  Hope to see you again soon - maybe with a video even!

Love and Embellish With Flair,