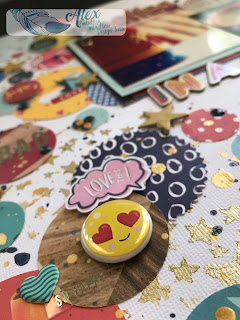 Alex here with another EWF project.

As you might have guessed from Heather's post, we're having a bit of a challenge here during the month of October. Heather and I have been holding down the fort of late, so we decided to throw each other a challenge to spice things up.  Crece wanted a sketch challenge this month anyway so #winning!

Heather and I each picked a sketch which each of us would make a project with.  The one Heather and I used this week was my pick.  It's by Clique Kits and a little different for me.
It's one I wanted to use at some point anyway, but I thought the sketch itself really lent itself to using flair badges. 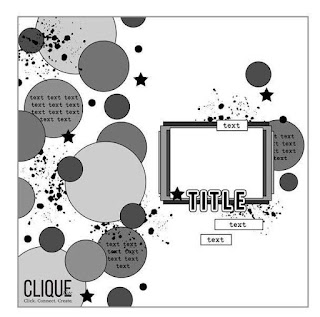 You can interpret this sketch quite literally and use circles as in the original, or replace them with any simple shape like hearts, triangles, stars etc.  The main reason I opted for circles is that the round shape emphasizes the shape of flair badges and tries to keep them as a main feature.  I'm not sure whether I succeeded in this respect given my style (which can only be described as "messy with a touch of psycho"! ).

If you check our Heather's interpretation, it's much more elegant.  Her post is immediately before this one.

Unfortunately I don't have a process video this week, but I'll see what I can do next time when Heather and I tackle her choice of sketch.

I decided to "lightly" stencil some gold stars first before layering the circles on top.  Since I decided to use punches, I was limited to the sizes I had.  Throwing in two sizes of pinked circles added interest and seemed like a happy medium between circles and stars.  My largest punch was smaller than the one in the sketch so while the placement is generally the same, it's not identical and there are more clusters of circles in my layout. 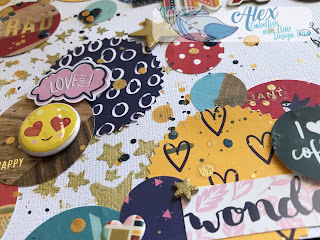 Next step was messy ink splatter.  I started with gold and while it looks lovely on darker colours, it wasn't giving the emphasis I wanted.  I added some navy after it dried and it helped a little bit. 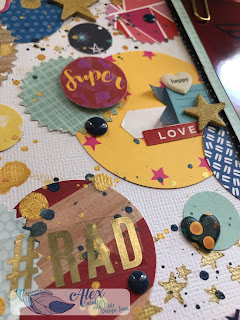 Then I mixed some gold paints and painted some DIY star Thickers for some texture and dimension.

I matted the photo block with lots of layers, which I was pleased to see in the sketch since I'd be doing it anyway!

The small shelf above the smaller photo was great for nesting the first part of the title...except I just couldn't find the right size and colour of alphas.  I'm glad I included the woodgrain among all he primary colour as a bit of a neutral (which is why I used kraft alphas here).  It also is a sort of a nod to the chair slats in the bokeh part of the larger photo.

I used a punch on some square stickers and trimmed down others.  Initially I thought the clear gold stickers would look better on white cardstock, but I changed my mind.  Using the stickers as they are just gives a subtle detail here and there. There was this pack of puffy hearts I rediscovered in my stash a little while ago and I made good use of them and added navy enamel dots just because I could!  Overall I think I used less embellishment than I usually do, but I don't think I could have added more considering all the crazy colour and pattern going on.

As far as the flair itself went, I could have (and almost nearly DID) use a lot more, BUT I need to keep some for next week's project since it might just be Wonder Woman related again! My personal challenge was to mix together some oddball flairs which might have been the last in the pack.  I think the three work quite well together on this layout despite being more than a bit random!

I journaled on the layout itself as I often do, but textured cardstock doesn't make it easy! 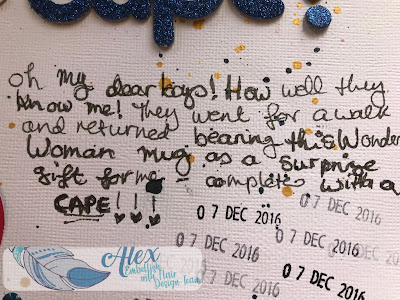 And here's the whole thing: 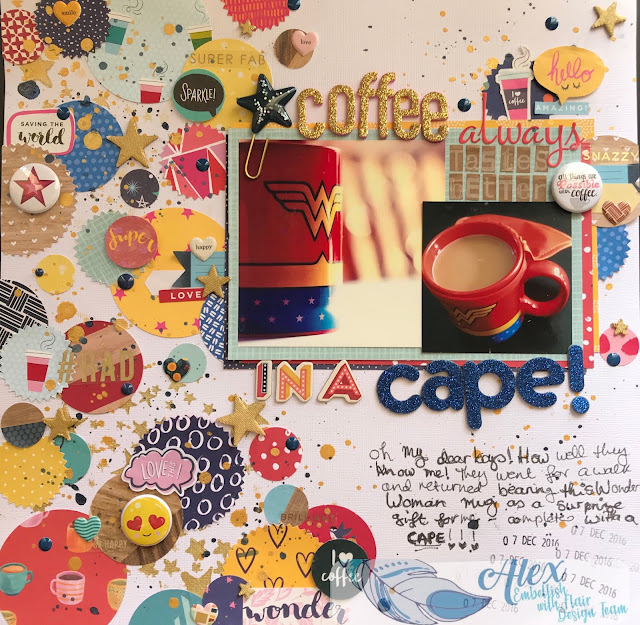 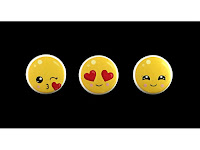 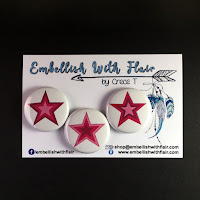 Thanks for stopping by and hope you come back soon to see what Heather challenges us with!

Love, and Embellish With Flair! 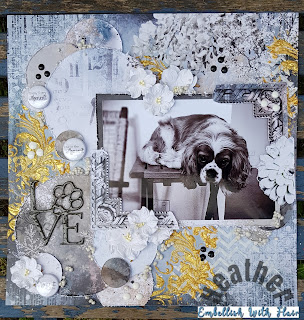 I love this photo of my new puppy, Enzo. And these papers and flairs were perfect.
I didn't want to add much colour, but decided to add the touches of gold to represent Enzo's brown patches.
The design for the layout has come from the sketch below that a couple of us are using. 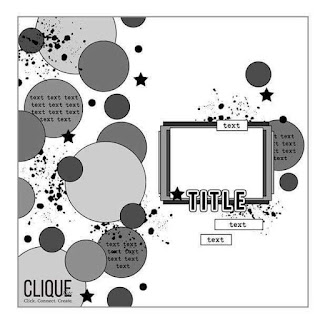 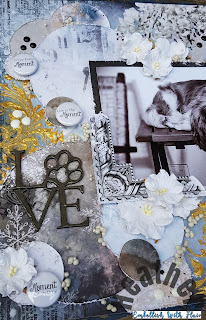 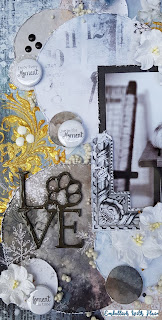 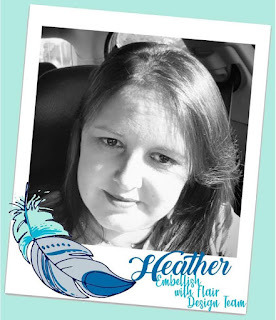